So this weekend I had the chance to perform in a Luau that my Friend Kypo put together for a missionary event. I didn't think that I'd have the chance to do Polynesian dance again after BYU! Who would have thought I'd get to dance in a show! Kypo is Hawaiian and he thought that Kypo and Jessi sounded weird so he insisted on calling me Uluwehi. He doesn't mess around with Luaus. So now I officially have a Tahitian princess alter ego. Like Beyonce! Uluwehi is my Sasha Fierce. And I got to wear the skirt with the tassels which I've wanted to do FOREVER! It was kind of a big deal for me so I am sharing it with you all!


The sister missionaries did my hair, they were so cute and got really excited about it. This is the second time. Kypo thought the first one wasn't big enough. 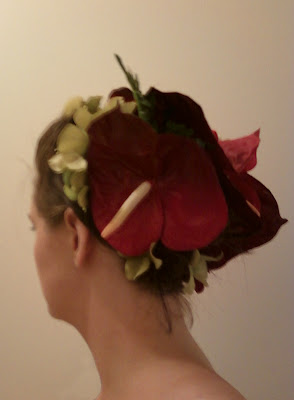 The last number was this really beautiful hula that is all about the connection between families and from generation to generation. My camera died while I was dancing so I can't post that one but you can see a gorgeous version here. You should all check it out!
Posted by Jessi at 6:08 PM

So cool! I didn't even know you danced!

umm, you rock. Colby just walked in as I was watching this and was like, omg, who is that? When I said you, he was like "no way, I didn't know she could do that." Yes, my friend, you rock. Oh, btw, I then proceeded to teach him everything I know about hula, which I learned from you---it's not i the hips, it's in the knees, like you are waiting at a bus stop and get tired so switch weight to the other leg. :) Nice.

jessi holy crap!! check you out! i had no idea you could move your hips like that.

how the heck to you get your hips to move like that?! you HAVE to teach me! I'm so sad I missed it and so glad you posted a video! Wow. Not only are you a talented visual artist, but an amazing dancer and performer as well. Here's my standing - O !!

Remeber that one time we went to Tahitit...