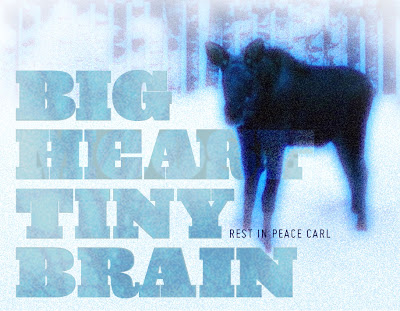 Our new moose friend Carl was brought to an untimely end last week in Anchorage. He was struck by a car which broke both his back legs. Officer Josh Lamb responded to the scene and when Carl failed to get up, was forced to put the moose out of his misery. We can only be glad that he was spared the truma of a bear or wolf doing the deed. Carl, though we question your intelligence level, we are sad you're gone. You got dad to run faster than any of us thought possible. Next Christmas we will fondly think of you running free in the great strawberry patch in the sky.

I composed a limerick for the occasion:

We had a young Moose Friend named Carl,
He got himself into a gnarl.
Stuck in the back yard,
Dad made his life hard.
Rest in peace our dear Moose Friend Carl.
Posted by Jessi at 10:27 AM

Are you sure it was Carl?

Probably was. He's been hanging around kempton hills lately.

What can I say? I'm sure Carl is the only one of his kind that can claim an original limeric composed in his behalf. You will be happy to know that a different moose (one much larger) has now taken up residence on our street, in Carl's place.

It was not a good week to be a moose- Josh had to shoot two while working.